STOP GRAYSON
Join Our Campaign
for Clean Energy in Glendale

Success! Thanks to all of the hard work, input, and continuous pressure from the community, City Council placed conditions on GWP’s proposal for Glendale’s energy plans, and asked staff to push for more renewable power, transmission, and other ways to reduce the need for natural gas generation. Thank you to all who played a part! The final decision is still to come, and we will continue to work toward our goal of NO NEW GAS in Glendale. We’ll need your participation in the coming months. We hope you’ll keep working with us as we continue to push for sustainable policy for our city! We will update this page with more details soon.

OUR GOAL
Get GWP to hold off on any new gas power at the Grayson power plant until it has fully exhausted all other remedies.

In 2018, after months of public outcry, the residents of Glendale succeeded in getting City Council to vote 4–1 to pause a gas-plant expansion (which they call a “repowering”) at the Grayson site in South Glendale, and first explore clean-energy alternatives. But the fight is far from over! Despite clear public concerns about air quality and climate change, Glendale Water and Power is still pushing gas. City Council will vote in July on a new energy plan, which could include spending hundreds of millions of dollars on up to 93 mw megawatts of gas. If this plan passes, this would almost certainly be the LAST gas plant built in the state of California. Not the legacy we want for our city! Instead of gas, we should be moving as quickly as possible to 100% clean energy. Current technologies, for the first time, are allowing communities to be ENVIRONMENTALLY RESPONSIBLE while enjoying ENHANCED RELIABILITY at LOWER COST. Let City Council know that we want Glendale to be a leader, not a dinosaur. No new gas in Glendale! Read the Sierra Club & Glendale Environmental Coalition’s OPEN LETTER to Glendale City Council critiquing the GWP proposal and suggesting a path forward.

Here are ways to
TAKE ACTION:

WHAT CAN I DO?
1: Stay Informed! Join Our Action Network

GEC keeps everyone in the loop via our Action Network emails. If you haven’t already, add your contact info so you can STAY POSTED on meetings, rallies, action updates, and ways to volunteer!

WHAT CAN I DO?
2: Join Our Facebook Group / Get Social

Join our FACEBOOK GROUP to be part of the discussion and find out about Grayson-related news, read articles on climate and waste policy, and stay in the loop on the goings-on at our monthly meetings! Visit and Like our PUBLIC FACEBOOK PAGE, and share relevant posts and tweets with your social circle!

WHAT CAN I DO?
3. Join the Virtual Power Plant

Be Part of the Solution! A Virtual Power Plant (VPP) is a creative alternative to centralized power-generating plants. It’s a cluster of individual sites (such as homes)—each with solar panels and a high-capacity battery—networked together. The utility subsidizes the cost of the battery and/or the solar panels, and in return, the property owner agrees to let the utility tap into the energy stored in the battery when demand peaks. The property owner also keeps a guaranteed minimum of backup power to run critical things like the fridge and lights. Instead of building a gas “peaker” unit just for infequent peak-demand episodes, or paying exorbitant amounts of money to bring in outside power, the city can turn to its own residents. We’d have a local clean-energy power bank, and a more reliable and resilient system! GEC has already identified hundreds of Glendale residents who may be interested in participating in a VPP once it’s available. Let us know if you would like to add your name to this growing list.

Our Goal: Get GWP to hold off on any new gas power at Grayson until it has fully exhausted all other remedies.

These other remedies include (i) utility-scale battery storage and Virtual Power Plant projects short-listed from the Clean Energy RFP, (ii) market-leading energy-efficiency and demand-response programs, which will likely require a new request for proposals to the clean-energy market, and (iii) renegotiated transmission and power-sharing arrangements with Los Angeles. While GWP works on these initiatives, it should remove the old units at Grayson and complete its environmental remediation of the site. If by 2023—after it has gained experience with clean energy and explored all possibilities with Los Angeles—GWP still sees no clear path to maintaining a stable grid without some gas backup, the issue could be brought back to City Council for consideration. GEC is confident that by that point, gas will not be needed.joint. For more detail, please read our GEC – Sierra Club letter to Council critiquing the GWP proposal and suggesting a path forward.

Our Argument: Why Clean Energy Is the Right Direction for Glendale

• The world is approaching a climate tipping point, and our way of life and very existence are at stake. Business-as-usual approaches are no longer acceptable. GWP must demonstrate that it has exhausted all other options before asking us to commit to investment in new fossil-fuel power, something it has failed to do.

• Clean-energy technologies are mainstream power options and in many cases are now cheaper and more versatile than natural gas. Just over a year ago, GWP scoffed at the idea of using battery storage as a solution to meet summer afternoon peak-power needs, saying the technology was not ready or was too expensive. A year later, GWP has embraced batteries and is considering a large battery installation at Grayson—but claims that the size is limited to 75 MW. GWP continues to reject the idea that rooftop solar could make a major contribution to Glendale’s power shortfall. In doing so, it ignores recent price declines and data showing that Glendale has enough rooftop space to meet most, if not all, of its power needs. GWP needs to maximize the potential of these technologies before considering any new gas.

• The plan to repower Grayson assumes no new transmission, and GWP continues to argue that new transmission is nearly impossible. GWP acknowledges that it will need additional transmission to comply with SB 100 (which mandates 100% zero-carbon energy by 2045), but instead of facing its obligations, GWP keeps making excuses. GWP needs to explore all possible avenues to increase transmission, including positioning itself to take advantage of the many projects Los Angeles is pursuing.

• One of GWP’s key arguments for gas at Grayson has to do with the growing demand for electric vehicles (EVs). It points to California’s goal to get 5 million EVs on the road by 2030, and assumes this will mean increased peak-power demand. But that argument ignores the potential for energy-efficiency programs to offset this demand, or for demand-response technologies and time-of-use rate plans to shift demand to off-peak hours, when it can be easily met without building new capacity. Utility managers understand that the cheapest power is the power we don’t use. Until GWP maximizes the potential of these approaches, it should not be talking about adding gas generators.

• It has been four years since the last gas plant was approved in California, and it’s unlikely that there will be any others. Los Angeles recently put a moratorium on new gas plants. If Glendale goes ahead with the Grayson repowering, we will have the dubious distinction of being the last community in the state of California to invest in gas power. Is that the legacy we want for our city?

• Not only would a gas plant be environmentally reckless, it would also be financially irresponsible. In a recent report, the Rocky Mountain Institute forecast that within two decades it will be more expensive to run existing gas plants than to build new clean-energy systems. GWP originally assumed it could finance Grayson with a 30-year bond, but now says it will need to pay off the project over 20 years. But that just increases the annual debt cost and will inevitably translate into higher utility rates. GWP is also underestimating the costs it will eventually have to pay the state for carbon credits, and ignoring the strong possibility that the federal government will introduce a carbon tax over the next several years. Investing in fossil-fuel technology is a risky strategy that will lock us into high and rising utility rates.

• GWP talks about reliability and spreads fear about the potential for blackouts if we fail to repower Grayson. What it ignores are the risks that come with a centralized system that depends on external fuel sources. Ever since the blowout at Aliso Canyon, the gas-distribution system in Southern California has been under pressure and subject to disruption. Gas curtailments are a new risk factor GWP has not addressed. Grayson is also highly vulnerable to a major earthquake, which could sever the pipeline supplying gas to the plant, or cause flooding at the point where the Verdugo Wash joins the L.A. River. Distributed energy systems—based on rooftop and carport solar, batteries, energy efficiency, and demand response—provide the highest level of reliability for Glendale residents and businesses.

From 262 MW to Today
Impact: GEC Has Made a Difference! 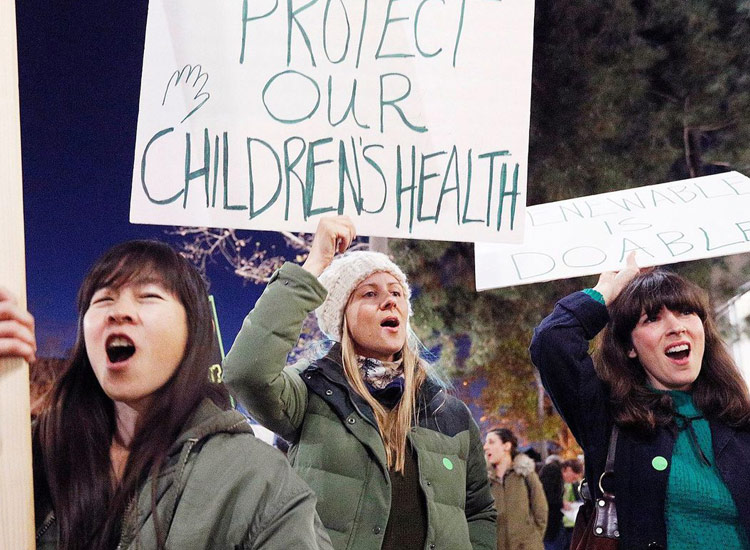 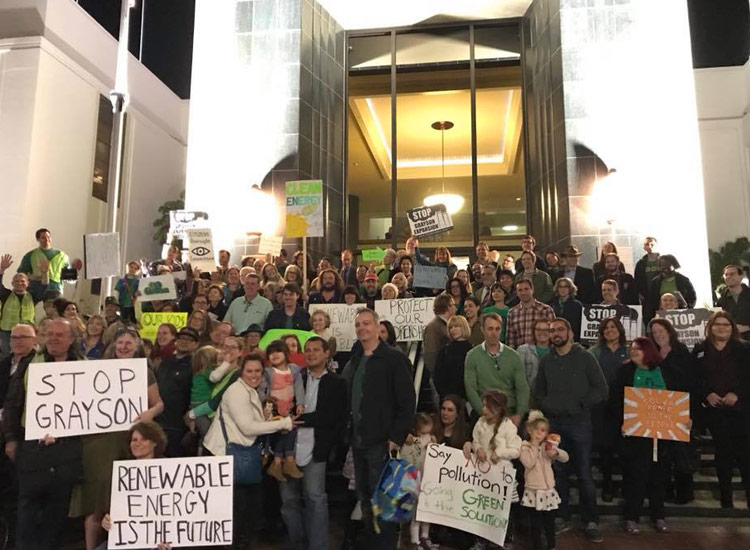 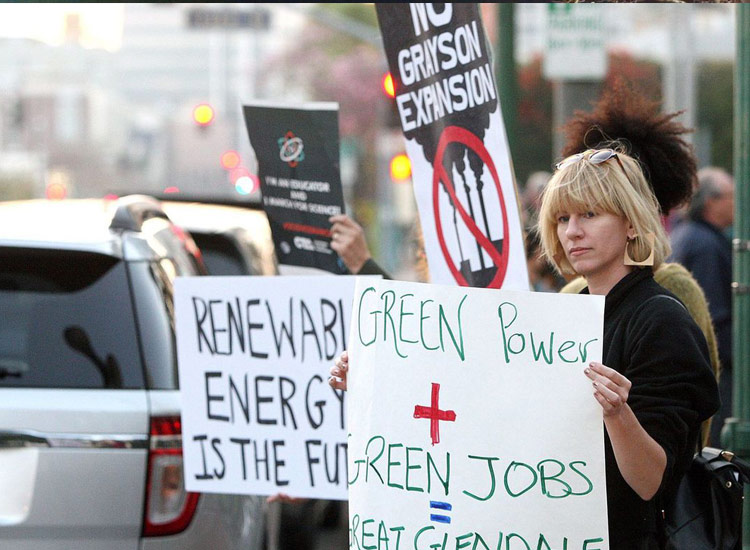 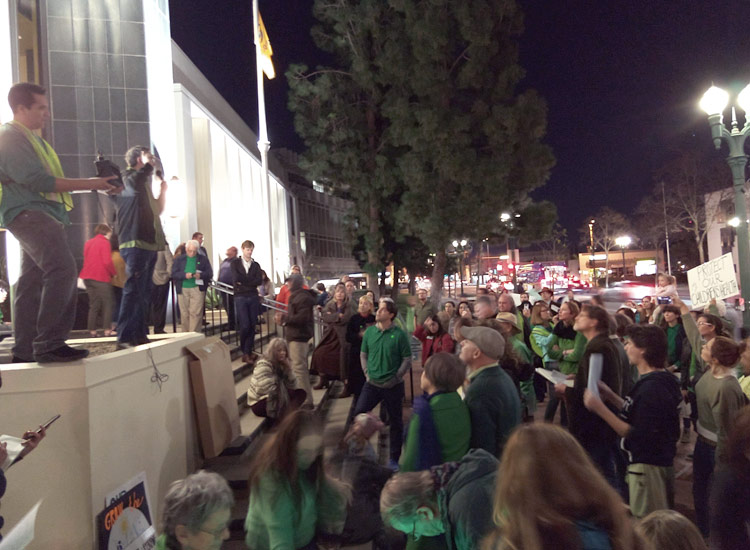 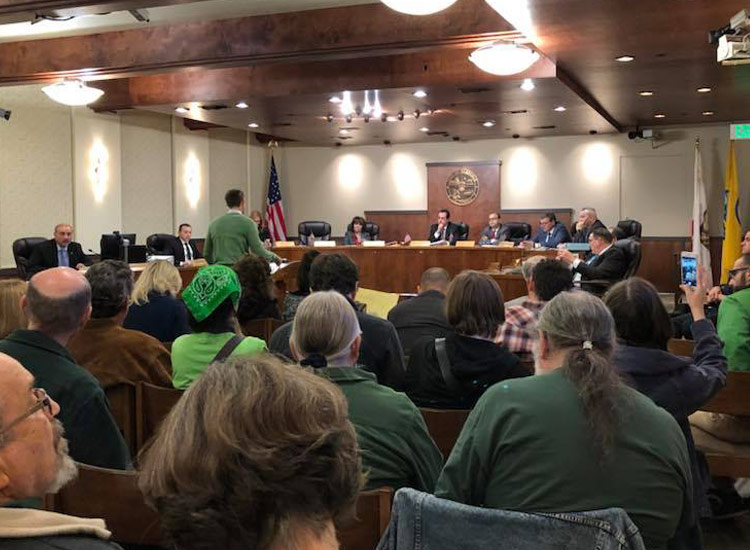 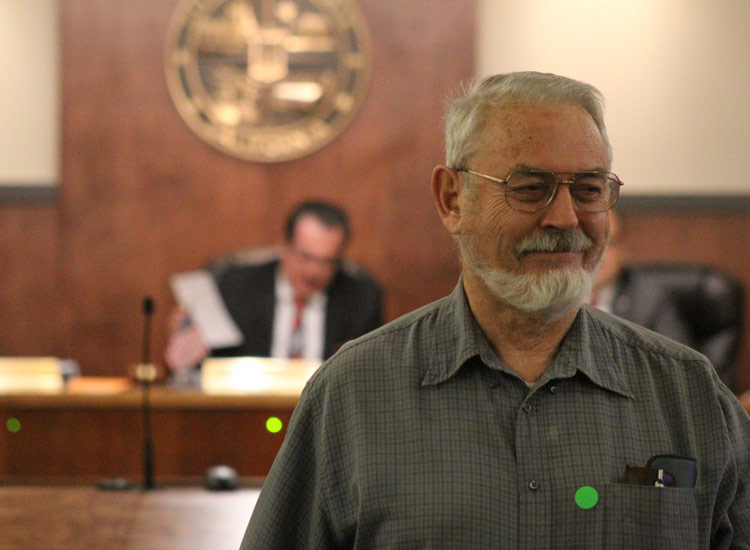 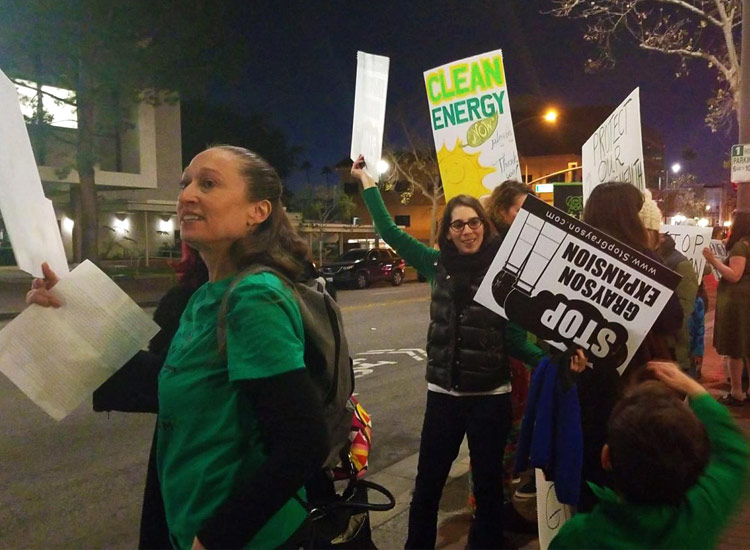 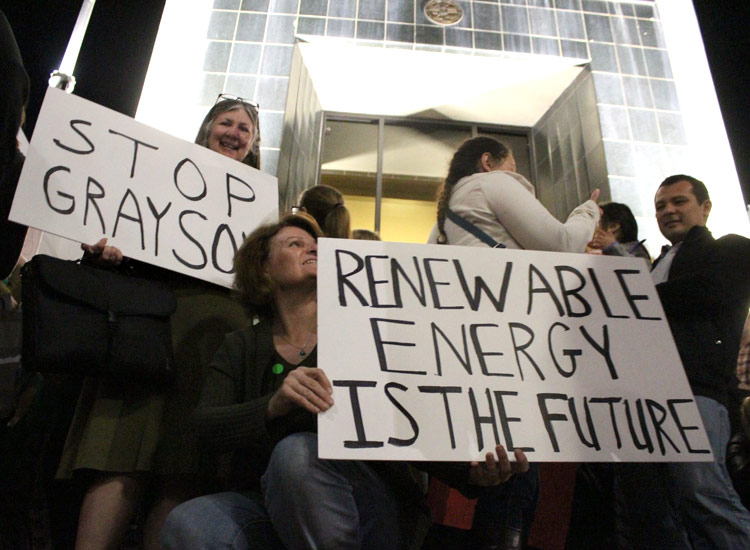 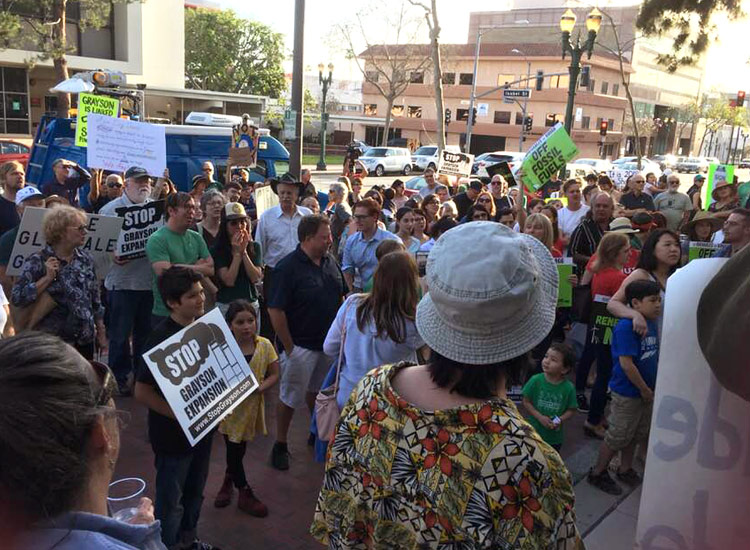 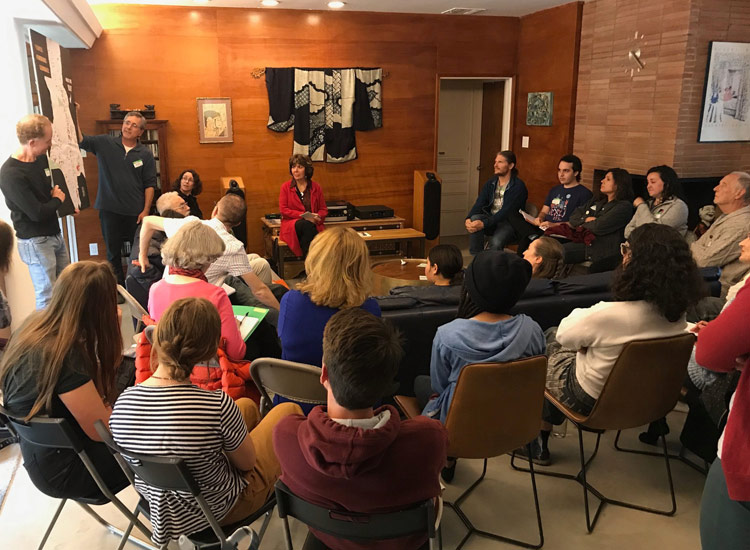 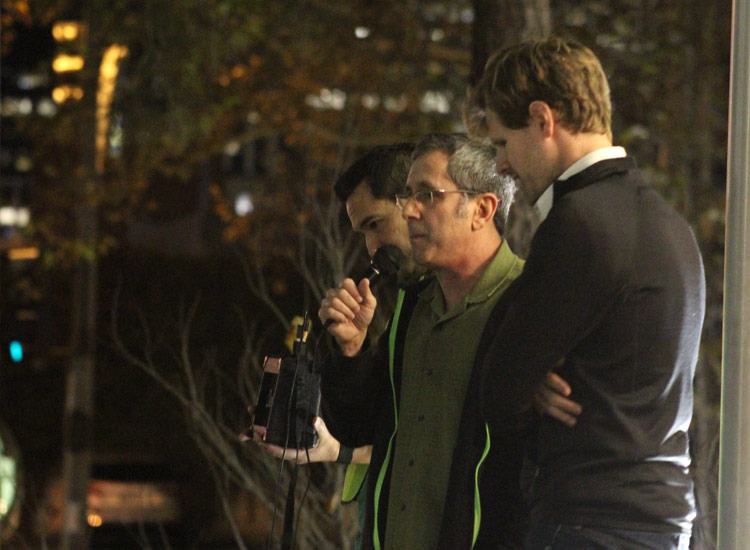 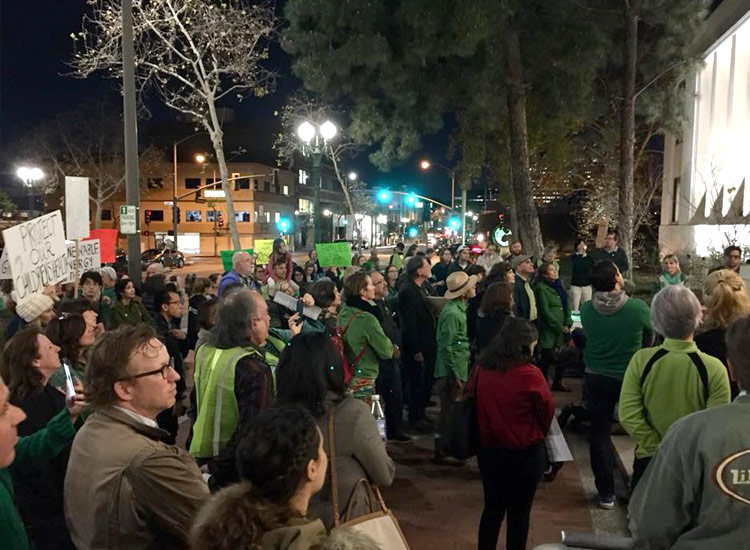 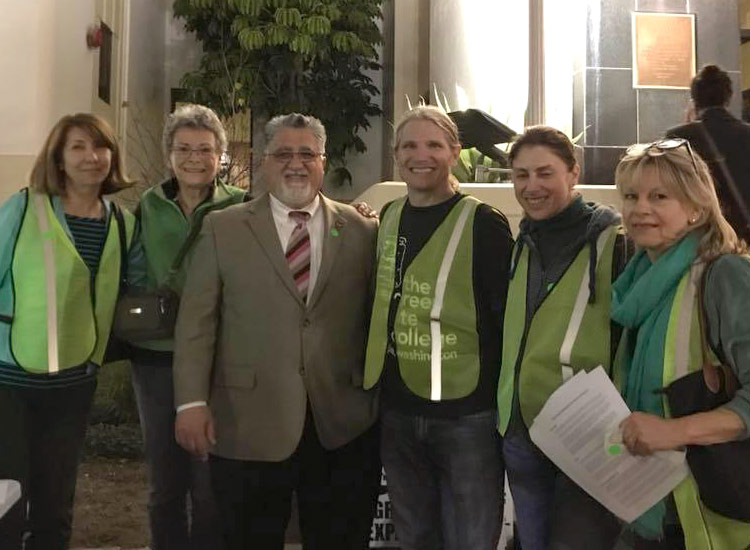 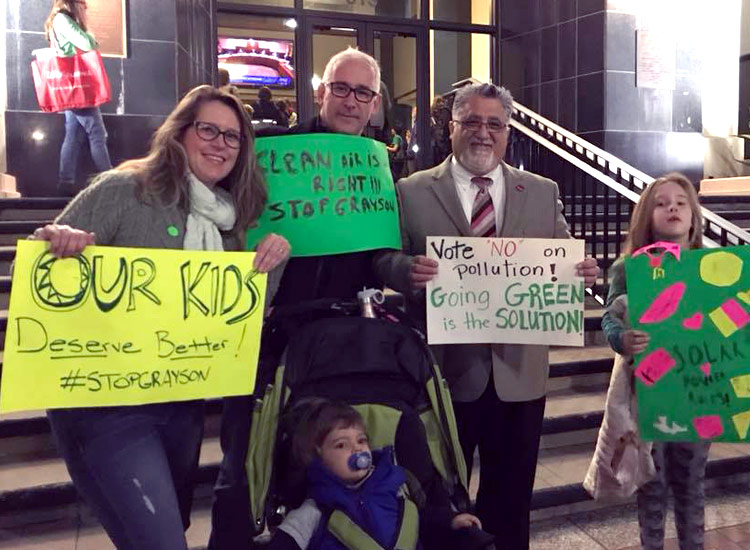 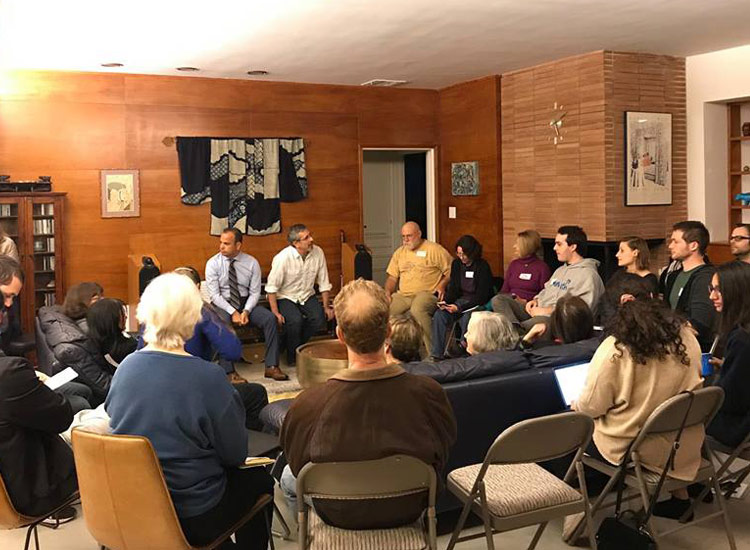 Press: GEC & Grayson in the News

Jose Huizar, Los Angeles City Council District 14—Statement of Support: “The Councilmember’s staff asked the Glendale Council to support the recommendation of the Glendale Water and Power Commissioners, pause the project, and solicit green alternatives to a gas-powered plant.”

CA Assemblywoman Laura Friedman—Grayson Power Plant project should be shelved (Op-ed, Glendale News Press, June 2018): “I want to focus on the economic risks posed by this plant because it’s important to understand that a healthy environment and a good economy go hand in hand today, while investments in fossil fuels are increasingly taking money out of our wallets and holding our economy back. To put it bluntly: Expanding the Grayson Power Plant will place an unacceptable cost burden on Glendale families when cheaper, safer alternatives exist….Glendale should halt plans for Grayson, bring in external consultants to develop a clean-energy alternative and move our city into the cost-effective, clean-energy future Glendale deserves.”

CA State Senator Anthony Portantino & Susana Reyes—sum up the problems with the plant expansion with their letter to the editor of the LA Times: “In short, the Grayson proposal would increase emissions and particulates that would adversely affect our climate and potentially impact the health of children at Benjamin Franklin Elementary, Mark Keppel Elementary and the Disney Children’s Center, as well as elderly residents of nearby Pelanconi Estates. The DEIR predicts global warming emissions will increase nearly seven-fold. This is the equivalent to 90,000 additional cars on Glendale’s roads….As recently proposed by Councilman Zareh Sinanyan, Glendale residents and ratepayers deserve that alternatives be thoroughly examined separately and independently from the Grayson EIR process. Given the severity of the environmental concerns and the cost involved with Grayson it can be argued that a multipronged renewables portfolio would be less expensive to implement and would meet California’s increasingly stringent emissions requirements.”

LINK TO a printable letter-size sign for your window (1.1MB)

LINK TO a printable FLYER (PDF)