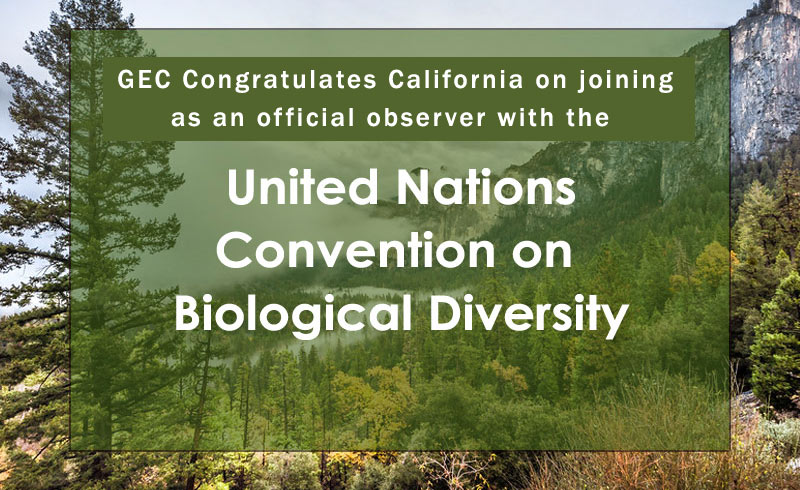 This past spring, GEC was pleased to sign on to a letter to California Secretary for Natural Resources, Wade Crowfoot, urging California to become an official Observer with the United Nations Convention on Biological Diversity (CBD). Here’s our post about that letter. GEC was especially proud to support the request because it was led by our own 43rd District Assemblymember Laura Friedman!

We’re very happy to give this update: On December 16, during a California Natural Resources Agency speaker series event, Secretary Crowfoot announced that California has become an official Observer with the CBD! This means that California can contribute to the global discussion about protecting nature, which has important implications for human health as well as the planet.

In this new year, we hope to share information and resources with you for:

* Engaging in contributing to California’s CBD input.
* Encouraging California to also participate with the CBD’s Advisory Committee on Subnational Governments.

We will update this post with further information when it is available!

Secretary Crowfoot announces California’s formal engagement in the conference of parties on biodiversity during a CA Natural Resources Agency Speaker Series Event, From California to Kunming: The Global Effort to Tackle the Nature Crisis

The UN Convention on Biological Diversity (CBD) is a global treaty from the early 1990s with 196 signatory nations. It’s the only treaty that protects all of nature worldwide, and it aims to link biodiversity protection with healthy climate protection (think, for example, of forest protection). The United States has never joined the Convention.

In spring 2021, there’ll be a conference of the parties to the treaty, when they’ll work on a post-2020 global biological diversity framework. See here and here. We need strong voices in support of environmental and climate-protective policies to take part in these negotiations.

Subnational governments can’t be full negotiating members at the conference, but they can participate as officially designated Observers. In joining the Convention as an official Observer, California is sending a message to the world that it leads the US in protecting ecosystems, the climate, and human health. Where California leads, other states, cities, and counties will follow.